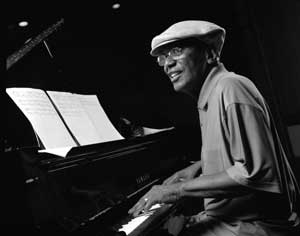 Comparisons seem to be our best ally when reflecting on the arts. Excessively so. When it comes to appreciating the work of musicians, we tend to overindulge our natural impulse to compare and, more annoyingly, to categorize. “Oh yeah, this sounds like (…) minus the vocals (…)”.  Undaunted, I go ahead and draw some arguable parallels with three pianists I have been obsessing over for years: Thelonious Monk, Andrew Hill and Herbie Nichols.

I am listening to Andrew Hill’s Black Fire right now. It’s a masterpiece. For a composer who was hastily locked into the avant-garde category in the 60s, every song here has a surprisingly hummable quality (i’m not kidding…try it when showering, you might get to the bridge if you’re really good!), which is not the usual critical description of Hill’s music. Black Fire, released on Blue Note and recorded on November 8th 1963, is Hill’s debut as a leader, hardly two months after contributing fabulously to Joe Henderson’s Our Thing. All musicians on this date play with jaw-dropping inventiveness and though Andrew’s compositions keep to fairly standard forms at this stage, the music pushes hard at the edges of the hard bop zeitgeist. Henderson rips through every song with a searing tone that sets off Hill’s off-kilter runs beautifully. This is possibly Henderson’s best recorded music.  Andrew held on to Joe on Point of Departure and Pax (respectively released in 1964 and 1965), and I wish this cohesive association had gone on into the 70s. For what it’s worth, I think a modern-day equivalent of that sonic chemistry can be found in the work of guitarist Kurt Rosenwinkel and saxophonist Mark Turner. Anyway…

Hill’s and Monk’s careers went down very different musical roads. By 1950, Monk had the bulk of his songbook written out and played a rotating set of favorite songs throughout his performing career, unlocking new areas of sound on each performance without any real interest in renewing his repertoire. What’s the point of seeking out newness for newness’ sake when your music always feels new? The harmonic and rhythmic language Monk developed in the 40s became his signature and despite the singularity of his quirky melodies, the tunes rarely deviated from the 32 bar form usually played at a plodding medium tempo, with a rhythm section expected to swing hard or get off the bandstand. Yet Monk had to wait a solid 15 years for critics to admit they’d mislabeled him as an “eccentric” bebopper and acknowledge his original genius. Both Hill and Monk have a unique and deep sense of form that may have been underappreciated to this day. Producer Michael Cuscuna (Blue Note RVG reissue series) encapsulates parallel misconceptions about Monk and Hill: “although (Hill’s) music had melody, harmony, and rhythm, his conception of each was so unique that he was categorized with the avant-garde. This music was avant-garde in the strictest sense, but it was anything but free form. As Monk was lumped into the bebop movement because he was there, so was Andrew put into the freedom bag. His music was free of cliché, but that was about the extent of it?” (quoted from Black Fire liners).

It’s not clear how much Monk influenced Hill’s early music but songs like “Work” and “Trinkle Tinkle” could not have been unfamiliar to Hill’s ears. However, Hill’s use of dissonance seems to spring from a different place than Monk’s and you won’t find many traces of the whole-tone harmony Monk delighted in. I might be wrong.  Listen to Hill’s “Pain” on the Change album, for example.

The start of this song, along with its stop-time rhythm, is impossible, it is so quirky in a “I just accidentally fell over the piano kind of way”, a very Monkish feature for sure (Now play Monk’s “Work”… can’t seem to put it up, sorry, but look for it!). But while Monk never strays too far from the melody, instead restating it obsessively in various permutations in his improvising, Hill bends and molds it into different shapes, interjecting a host of rhythmic accents.  ‘Subterfuge’ is a case in point, a dark theme stuttering along over an insistent syncopated beat. Roy Haynes does a great job of keeping things steady while Hill gathers momentum and gradually layers in more cryptic density.

Throughout his life, Hill pursued a wide variety of esthetic directions, using various Latin beats, odd meters, voices, open-ended forms, and leading big bands. Undoubtedly, Hill’s music is a more “difficult” listen than Monk’s but it offers equally thrilling rewards for whoever will listen to its angular beauty.  Full of sharp turns and red herrings, what Hill’s music may lack in humor – unlike Monk’s – it more than makes up for in sophistication and mystery. The music often feels like it might fly off into pure abstraction any second but never quite does. Even at his most Monkish, Hill’s piano has an unrelenting inner logic that is complex, mesmerizing and positively unclassifiable.  Obviously, this has to do with Hill’s jagged writing, a synthesis of myriad ‘inside’ and ‘outside” forms that gives the music its arcane lyricism and shine. Intriguingly, there’s always a ragged edge to Andrew’s romanticism and even on a beautiful ballad like “Erato” (On the album Pax), there is a sense that a storm is gathering nearby.

Right up to the end of his life, Hill produced daring and engaging music, as his last public concert in 2007 with bassist John Hebert and drummer Eric Mc Pherson makes abundantly clear. Note the doubly spiritual dimension of the event held in Trinity Church.

Another favorite pianist of mine is Herbie Nichols. In many ways, Nichols prefigures the eerie darkness of Monk and Hill. He was also a freelance writer. Ironically, he wrote the first critical review of Monk and championed his music long before anyone cared to notice: “This particular fellow is the author of the weirdest rhythmical melodies I’ve ever heard”, Nichols wrote of Monk in 1944 in the black magazine Music Dial.  Later the two pianists struck up a lasting friendship. As Robin D.G. Kelley recounts in his impressive biography (Thelonious Monk The Life and Times of an American Original), Monk and Nichols had common personal and musical roots, having been born in the San Juan Hill neighborhood in New York, home to the largest black community in the early 20th century.  Two years younger than Monk, Nichols grew up absorbing the sounds of the West Indies his father’s generation had brought over to San Juan Hill. When asked by producer Alfred Lion to write the liner notes for a Blue Note album, Nichols reminisced about his Caribbean background: “Perhaps that is why I’ve always particularly enjoyed the exotic styles of Denzil Best and Thelonious Monk, in whose music I can trace this influence of my youthful years.” Like Monk, Nichols looked back to the various styles of early jazz and dance music – New Orleans, fox trot, stride, swing, shuffle – to forge a deeply personal voice out of them.  Unsurprisingly, Nichols’ music has a powerful dance element to it, a buoyancy particularly reinforced by his interaction with the drums. On “Chit-chatting”, Nichols transposes a heated conversation in a crowded bar or “similar gathering” (he writes) using a repeated noirish melody punctuated by a descending chromatic line.

On the 3-CD boxset that bundles together his entire trio recordings on the blue note label, there isn’t a single weak song. Each has a distinctive character, an unusual blend of joyfulness and brooding moods. Disheartened by the seedy atmosphere of Harlem’s after-hours music scene, Nichols struggled to get his innovative music noticed.  “House party starting” is a telling example of his bittersweet feelings. After the drums break, the melody almost mimics a man fumbling his way into the “wrong” party. But soon Nichols decides he might just stay and have a drink, and the song lights up. About his own tune, he writes: “House Party Starting […] speaks of grave and silent doubts as to whether there is really going to be a party, whether there is going to be lots of fun.”

That Nichols died prematurely at 44 in obscurity is a major oddity of music history. Aside from ‘Lady Sings the Blues’, which Billie Holiday famously made her own by writing lyrics to it, almost no composition has made it into the standard repertoire. With the notable exceptions of Vijay Iyer, Geri Allen and Jason Moran, few musicians have recorded or acknowledged their debt to Herbie’s unique music. If any of you out there has heard a Herbie Nichols tune before at a jam session, please let me know and be sure to give me the address.

Though Monk, Hill and Nichols followed different personal and musical paths, their music has a common dark and complex undertow that contrasts with their humor and joyfulness. I still have a lifetime’s worth of mazes ahead of me to get lost in.On a last note, I’d like to thank Joanne Robinson Hill for answering my email and giving me permission to use this nice picture of Andrew.

Joe Henderson: Our Thing (with Hill on piano)

well you need it

well you need it